A head-to-head dueling TCG set in the Marvel Universe 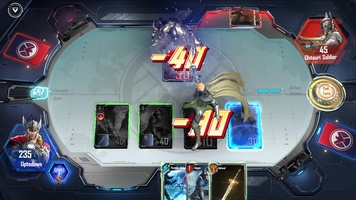 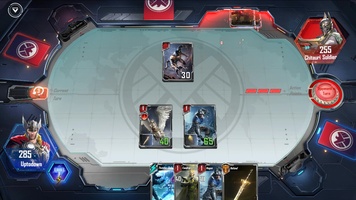 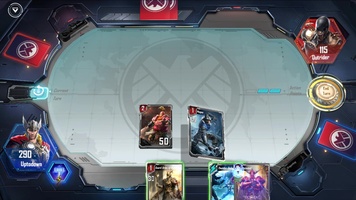 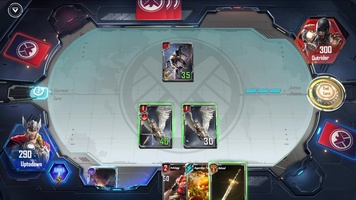 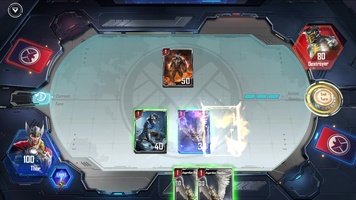 Advertisement
Marvel Duel is a card dueling game set in the Marvel universe. You can either play alone using the adventure mode or against other online players. The first superhero (or supervillain) who manages to reduce their opponent's life points to zero wins the match.

Marvel Duel's gameplay strays away from the genre's usual style, which has been highly impacted by Hearthstone for years now. In each of your turns, you can summon a character and play as many trap, team and spell cards as you want. But, keep in mind that when it comes to attacking your enemies, you only have three action points. So, choose your characters wisely.

Once you've completed the Marvel Duel tutorial, which quickly explains the gameplay details, you can start playing with the different game modes. On the one hand, there's the adventure mode and the challenges, which you can play alone or against the AI. On the other hand, there's the traditional duel mode, which challenges you to fight against other online players.

Without a doubt, one of the most interesting aspects of Marvel Duel is the collection of cards. In the beginning, your deck only includes a few cards, but as you continue to play and win games, you'll earn more. As you can imagine, all of your favorite Marvel characters are included. Plus, they're all spectacularly designed.

Marvel Duel is an excellent card game that stands out due to the impressive visuals that submerge you into absolutely spectacular battles. The gameplay is unique, dynamic and fun, which translates into faster card duels than other similar games.
Reviewed by Andrés López
Advertisement

Marvel Puzzle Quest
The superheroes have taken over the ledgendary Puzzle Quest
Krrish 3: The Game
The official game of the Indian blockbuster
Injustice: Gods Among Us
DC superheroes in their most spectacular battle
Batman: Arkham Origins
Join Batman in his fight against crime
Marvel Contest of Champions
The most epic battles in the universe
MARVEL Future Fight
The best superheroes in the universe united in one game
Super Hero Fighter
Fights between the most powerful superheroes
MARVEL Avengers Academy
Go back to school with the Avengers

Tongits Go
Play fast and fun games of Tongits
Teen Patti - Indian Poker
Face your opponents in this Indian poker game
UNO!™
Classic UNO™ fun for your Android!
Yu-Gi-Oh! Master Duel
Intense Yu-Gi-Oh! card duels on your smartphone
Magic: The Gathering Arena
The full 'Magic: The Gathering' experience, now on Android
Pokemon Trading Card Game Online
Play, exchange and challenge other players from around the world
Pokémon TCG Live
Collect cards and battle with your Pokémon
Tongits ZingPlay
Play a game of Tongits against players from all over the world